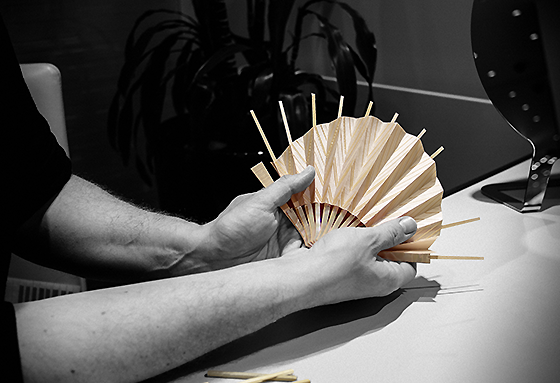 SYLVAIN LE GUEN, WHAT BROUGHT YOU TO THIS PASSION FOR FANS ?

I was eight years old when I first saw a fan: it sat on the mantelpiece at a neighbour’s house, and I was bold enough to reach for it and take a hold of it. I was immediately fascinated by the mechanism. Love at first sight, as they say; I was totally taken in by the way this slim object opened and closed, a blend of mechanical magic and poetry that brought up so many feelings in me.

I bought my first fan when I was ten, with my pocket money. That same year, I tried to recreate it with some thin sticks and craft paper, and after that, I was hooked…

I’m completely self-taught: everything I learned was from books and studying antique fans and reproducing each stage of the manufacturing process to rediscover the skills of a lost art. The fan allows me a huge range of creative freedom, with its endless variety of shapes and choice of materials and their combination. I’ve developed a three-dimensional aesthetic that plays with the concept of volume like in a pop-up book. Since I was also fascinated by Japanese crafts and design at a very young age, the idea came to me to merge the art of the fan with the art of origami. That led me to produce the first origami fans.

WHAT IS IT ABOUT FANS THAT ATTRACTS YOU?

Mainly it is their mechanism—how dense and compact they are when they’re closed, how intriguing they are, because you don’t know what’s hidden inside. Then, when a fan is opened, it becomes something else, revealing its intimate self, its seeming fragility, the expression of its true nature. For me, we have there the emergence of form, an organic development, a living thing taking shape out of straight lines and angles. The principles of proportion, the golden ratio (Φ, or phi), and calculations of angles allow me to construct seemingly simple modules that actually follow strict geometric rules. Usually I don’t work with a theme for collections because I like to give each creation an individual personality, rather than try to create a set. Nature and geometry fuel my endless curiosity and allow me the freedom to create.

The image of the fan evokes a wealth of historical images: a flamenco dancer, a geisha, the ladies of the French court in the 18th century, and so on. Throughout history it has been a practical object as well as a symbolic one. Very few people know that in fact, fans were originally used by men! They symbolised the power of the clan leader or warlord and they could be used to keep the horde’s fire going, repel insects or guide the troops into battle. With time, the fan has taken on a wide variety of shapes and styles across all cultures of the world. In China, fans were carried by members of the educated class, notables, judges and courtesans. In Egypt, they were made of gold or feathers,

veritable sceptres denoting the authority of the sovereign. Then, in the 16th century, they began to be imported into Europe from Japan and China, and were favoured only by the gentler sex. Women of the aristocracy saw this intriguing exotic item as a frivolous accessory to keep their hands busy and signal their social status by the richness of its ornamentation. Queens and empresses throughout the courts of Europe wore jewel-encrusted fans, each piece more delicate and extravagant than the next.

HOW DID YOUR ASSOCIATION WITH LA MAISON ADLER COME ABOUT?

The decoration Team first contacted me to ask whether I would like to develop a fitting environment for the current window display of their jewellery. They showed me the Fan’tastic collection, a reinterpretation of the fan’s aesthetics and its symbolism. I immediately saw the contemporary connection with my creations. What I like most about this collaboration is the company’s trust in me, the fact that they’ve given me free rein to create. Our work grew out of the exchange of ideas and sharing each other’s passions. Giving a modern reinterpretation to this symbol while working with a long-established family jewellery business meant joining a demanding, yet fascinating creative project, not unlike the history of the fan itself.

HOW DID YOU MANAGE TO COMBINE YOUR WORLD, YOUR OWN AESTHETIC SENSE WITH ADLER’S?

This cooperative effort was the start of a real dialogue between jewellery on the one hand and the fan on the other. What I wanted to do was to exhibit the structure of the fan, without impinging upon the impact of the jewellery itself. Together, they form a whole. For me, it is essential to arouse curiosity and surprise by creating unexpected shapes and volumes that arise when the fans are opened and closed. Like Adler I seek to add that extra touch of charm with their creations.

HOW DID YOU DEVELOP THIS UNIQUE FAN COLLECTION?

I used clean, simple lines to best accompany the jewellery. The Collection I created for the Maison Adler is made up of 22 nonfigurative fans in a single colour, each with its own architecture. My theme was the interchangeability and chromatic consistency of each pieces. I go for high-impact, emphatic structures: broken, radiating lines producing an interplay of hollow and solid spaces. As I see it, the yin-yang balance can be achieved by repeating elements with straight lines and by arranging them in a way they define a circular object. Here again we find the expression of the femininity always present in Adler creations. As for my materials, I wanted them to be eclectic to show the extent of the possibilities and offer my interpretation of the Adler family’s deep interest in unusual and innovative materials.